Welcome to the fifth virtual show from Dodo Modern Poets.
The latest production takes our tally to nearly 150 performances and contributions since the launch outing in April 2020. We thank all contributors for taking part in a project which has kept Dodo alive during the long pandemic year.
International contributions this time include poems from Django Moon, Malaysia and Miriam Calleja, Malta. Django performed an open mic spot at Dodo while visiting London and Miriam was a featured act in July 2017. We thank viewers who take time to enjoy the shows and frequently respond with such positive comments. You keep our spirits up!
The latest outing begins with two fine featured acts, Nina Baxter and Graham Buchan, followed by 27 open mic contributors.
Nina Baxter, born in London in 1992, has a BA in Art History from The Courtauld Institute of Art and works mainly as an artist. After leaving her last studio in Bermondsey she split her time between London and Florence, She now works from her bedroom which has become a makeshift studio during the pandemic. Her poems have been published in Reach Poetry, Acumen and The Cannon’s Mouth. She read as a featured poet with Dodo Modern Poets at the King & Queen in Fitzrovia in November 2019. Her paintings have been exhibited internationally, with works held in private collections in the UK, USA, China, Czech Republic and Ukraine.
Graham Buchan is an Anglo-Scot based in London for the past 45 years. He graduated as a chemical engineer but worked instead as a freelance film-maker in the British and American TV, film and video industries, concentrating on factual material in news, medical, technological and industrial topics. He has published four collections of poetry and read his work in the UK, France, New York, Austin, Vancouver, Nicaragua, Mexico and Iraq. He has published short stories, travel writing and many art and film reviews in UK magazines and newspapers. Towards the end of his career he spent five years facilitating creative writing sessions for people with mental health problems.
We hope you enjoy the show and that 2021 has started well for you.
Best wishes
Patric Cunnane
PR Murry
DODO MODERN POETS 01303 243868
Miriam Calleja Miriam crafts words to communicate and collaborate See her work at www.miriamcalleja.com Emile Sercombe Aidan Nutbrown Django Moon Julie Stevens Lantern Carrier PR Murry Camilla Reeve Max Fishel Zolan Quobble John Tunaley Heather Moulson Barry Coidan Steve Tasane Julian Mann Oluwatobi Sanni Kevin Morris Sue Johns Joseph Healy Paul Richard Jones Wendy Young Stuart Larner Veronica Nelson Christine Eales 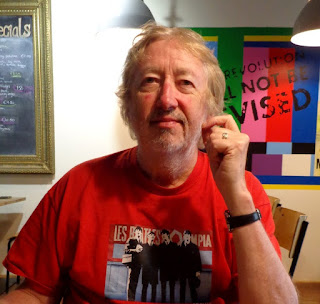 Anna reading at the Stray Dog

Anna in her twenties

Free to come and go

Modligliani drew her in Paris

She saved one sketch for life

And she became a prisoner of time

Bearing witness as loved ones were jailed

Outside prison a woman said

"Can you describe this?"

She did, forcing light from darkness

When Petersburg was golden with promise

When she came and went, trailing youth

Anna Akhmatova frequented The Stray Dog, a poetry venue opened in Petersburg in 1912. Other performers included Mandelstam and Mayakovski. Akhmatova celebrated the venue in her 1913 poem, 'We're All Drunkards Here'.

Cuan On Oir, the sheltered harbour,

Where I sailed a yawl in days of yore,

Protect the village of glandore.

A calm sea shimmers in the sunlight.

Silence.  Not even the sea gulls scream,

A place for man to find his soul,

And a vista that’s an artist’s dream.

Two yachts are silently at anchor,

Sails furled as if fast asleep,

Loath to leave this peaceful haven

To face the perils of the deep

To let inmates smell the brine,

The admiral was once a farmer,

Nothing to spoil this little haven,

No wild waves crash on its shore,

Who sails other oceans for evermore.

When writing a poem

When writing a poeM,

or forming a cantO,

try to be cryptiC,

use words that are ricH,

of phrases and sounds. TelesticheS

avoid, as they’re for the daring, the bravesT

of bards, the heroes, the foolhardy masochistS.

Piers Corbyn what a euphemism you chose!
do you suppose it makes sense, to those
who died on the railway, without their consent?

Piers Corbyn, were you trying your best to vent,
foment, or torment those who could tell you how time,
at ‘Arbeit Macht Frei’ was really spent?

Piers Corbyn, would you have ‘Auschwitz’ as a platitude?
equating it with vaccine, or voluntary choice,
confirming you’re ignorant, base and crude.

Piers Corbyn, would you’ve advocated any infectious disease,
sh’d run amok ‘mongst kids, while you sleep with ease,
having warned parents jabs would see them in cemeteries?

So, Piers Corbyn since it’s attested,
that you were arrested,
for slighting surviving internees –
your usual, casual, callous, ill-researched, breeze –
albeit your B and MSc degrees, you felt no alarm,
though aware, detainees were branded, each, on one arm.

Piers Corbyn, Concentration Camps didn’t offer invites or options,
those with numbers stamped on their limbs, were spared no emotions,
in the UK the herd may decline or concede,
but odds are, your kin ensured you were MMR vaccine-freed.