Welcome to the seventh virtual show from Dodo Modern Poets. The latest production takes our tally to nearly 200 performances and contributions since launching in April 2020. Continuing thanks go to contributors for supporting this project.

We thank viewers who take time to enjoy the shows and frequently take the trouble to let us know. Your support is of enormous value.

Max Fishel Born in Liverpool to Jewish parents he now lives in London. He plays Irish music, writes poetry and worries about hair loss. Mainly analogue, partly digital, he enjoys performing at open mic events. ‘You can lead a horse to water but you can’t pull the wool up the garden path’.How true this is. Thinks love is best. He has performed as a featured poet in a live Dodo show at the King & Queen.

Pauline has lived in London, Lincolnshire and Bristol in recent years and has enjoyed being part of different poetry communities and making new connections online. For several years she helped run Satellite of Love, a live event in Bristol and also hosted occasional events at Torriano Meeting House in Kentish Town. Her two collections are This is the Band ( 2018, Hearing Eye) and Spirograph ( 2020, Burning Eye Books). Contact on paulinesewards@hotmail.co.uk or on Facebook and Instagram as Pauline Sewards. Pauline is looking forward to doing more readings and hearing live poetry again. She is a member of Bristol Stanza. She has a poem featured in the forthcoming Culture Matters Anthology ‘Cry of the Poor’. She has been a featured poet at Dodo on more than one occasion.

We hope you enjoy the show and welcome your comments.

POEMS ON THE PAGE 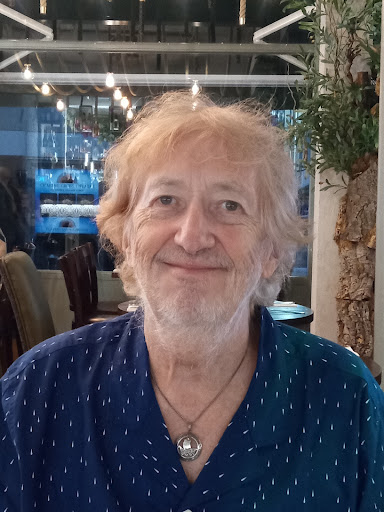 THE BLUE BOOKSHOP IN HOMS

They insisted life go on

They opened a blue bookshop

Customers warmed to the place

Poetry a fuel for love

Were scanned for information

The bookshop lives in peril

A  place to smile and cry

Feel warm about the world

Knowing it holds more than this

One day clouds will lift

Time to settle with a book

Turn to the chapter titled Hope

A  Syrian couple opened a bookshop in war-torn Homs and painted it blue.

A harvest moon flows on waves.

A surging sea on a harvest moon.

Time to rise from seafloor.

Go to your love on a far away shore.

How to find my love on an unknown shore?

How to survive the falling swell?

Told you a thousand times

When I see a harvest moon flow.

A thousand years ago.

All my people abandoned home.

And sailed away on a weeping sea.

Catch the moon on waves.

Cross this surging sea on the moonrays.

A harvest moon flows on waves.

A surging sea on a harvest moon.

Water is wide and wind low.

A seagull squalls on a rising tide.

Blackberries hung in clusters, that September.

We filled two bowls, before the fading of the light,

Walked familiar paths, with such a closeness,

Vainly attempting to reset the clock of time.

She spoke of women’s multi-tasking

Their role, in moving men from caves,

Evolving, and getting closer to breaking the glass ceiling,

And her daughters on the threshold of equality.

The luscious fruit did not fulfil her creative needs,

The fates had other things decreed.

Born to be a Soldier

If you remember Universal soldier by Donovan, then you can  use the tune for the chorus parts, otherwise it’s a slow and sad 12 bar in A

When he was a little boy, he always played with guns

I suppose that’s not unusual, when you’re a soldier’s son

But he never grew out of it, and when he turned eighteen

He went into the office and signed on for the Queen

His Mother tried to smile, though her heart was breaking

His Daddy died in Ireland, from nothing of his making

But he wanted to do his bit, and be the very best

He wanted to come back home with ribbons on his chest

When he was still eighteen

Another junior soldier in the cold and the damp

But he was used to all the effort, even when he was tired

When you’re born to be a soldier, you are inspired

So he did the Sergeants bidding, always top of his intake

Though his mates used to rag him, during every break

But soon that great day dawned, when the training was all done

And he stood there in a line up, spit, and polish and a gun

When he was just eighteen.

He found the waiting stressful, all the drill was hard

Training on a cold wet range, firing at a card

It wasn’t what he had joined for, all the waiting round

Guarding an empty warehouse on some freezing parade ground

But then one day the call came, there was a war out in the East

And our boys had to go there, to try to keep the peace

And as they queued up for the aircraft, to take them on their way

He remembered his father, and what he used to say

I was born to be a soldier

And as they left England's shores, he thought of home again

And vowed that he’d be back soon, just as soon as they were done

Then he sat back in his seat, and checked over his gun

The war was short and fierce, and didn’t last for long

The enemy were disorganised and always got it wrong

But even a wrong bullet can sometimes find its mark

It hurt like hell for a second, then everything went dark

And he came home wrapped in it,

In a drab green body bag

But he never saw Nineteen

A German pensioner who had a

huge arsenal of weaponry in his
cellar has been fined £213,000.
Klaus-Dieter Flick, 84, from the
town of Heikendorf, broke the War
Weapons Control Act.’]

Some pensioners are pretty astute,

they don’t always invest in a bank,
seems kin of Herr Flick of repute,
thought it prudent to hide a WW2 Panzer tank!

Here, the warriors of yore keep pets, treasure their souvenirs,
and their old horses are put out to graze,
tv battle docs are on tap and the veterans’ eyes fill with tears,
but the cellar couldn’t contain huge armoured machines made to raze.

The Leas by the Sea in
Folkestone
By Eddie Forde

On my way home
I touched the stone
Of my local church.
And longed to stay
With the singing birds
On this summer evening.
I have oft heard
The birds singing
And regretted leaving.


I envy them
For, unlike men
They do not weep.
For they see not
The final sleep.
While I
Knowing that man must die
Have the beauty of birdsong,
Which does not last long

I have grown tired of dullness,

of pessimism masquerading as experience,

All that is bright will be my new endeavour.

With skimmed eyes to look afresh

at what I, tutored in boredom,

I will become childlike.

The streets I walked down in

a monochrome haze, will sparkle

with the freshness of a new water colour wash.

The morning sun, I used to

sleep through, will be my early

I will greet postmen and road sweepers with a smile.

My hands once plunged

deep into my coat pockets

will, in future, warmly grasp my neighbour

I will cancel my subscription to world weary publications.

From today foreswearing all despondency

I will tear off my dull clothes of uniformity

And wear glad rags of optimism and innocence.