Welcome to the ninth virtual show from Dodo Modern Poets. This event takes our tally to more than 230 performances and contributions since launching in April 2020. We thank all our poets for continuing to send in such stimulating and enjoyable work.

We are grateful to viewers who take time to enjoy the shows and send us their comments.  Your support is of great value.

We hope you enjoy the show and  welcome your feedback.

Zolan Quobble has been active in many creative and performance organisations including Worthless Words, Apples & Snakes and Goldsmiths PGDip Creative Writing. He was co-founder of Fordham Park Festival (You Can't Kill The Spirit), founder of Deptford Kite and secretary of Silo SE8 Musicians Collective. Bands include Chicken Sidecar, One True Dog and now LOFE. Publications include U-I Poems and the Tooth Agenda. He's now concentrating on solo music projects. He has read at Dodo Modern Poets.

Julie Stevens writes poems that cover many themes but often engage with the problem of disability.
She is widely published in publications such as Ink Sweat & Tears (Pick of the Month, Oct 2021), Fly on the Wall Press, The Dawntreader and The Honest Ulsterman.

Find out more about Julie’s work at: www.jumpingjulespoetry.com 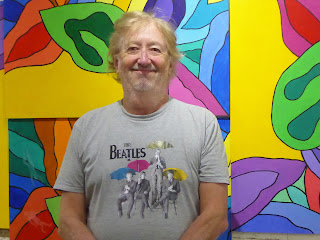 In February 2022 stubborn badgers returned to their old setts on Princes Parade, site of a controversial building project at Hythe, Kent.

The builders are in

Lived in for years

Through good times and bad

They belong to this site

Where grand badgers raised them

To fight for their rights

A housing estate can go somewhere else

As long as it goes, brock couldn’t care less

Badger lore was learned in these parts

Not to be torn from tender brock hearts

The builders are in

The housing estate must find a new field

Brock won’t go, has no wish to yield

Take your bricks and mortar and shovels

You’ve come to the right place

If you’re looking for trouble

WHEN  YOU  SAILED  FROM  GDANSK

When you sailed from Gdansk, in the early twentieth century, with your close kin,

you were but only eighteen –

an adventure, for sure – as yet, you felt no chagrin –

far back, Boleslaus III, born in eleven-zero-two, thought your ilk might just fit in,

though he didn’t see bumping off big brother, Wenceslas, as a sin,

for surrendering to German King Henry, and appearing quite keen.

Fast forward once more, to nineteen-zero-six, and your adventurous maritime cruise,

Dobrin on the Vistula was thrilled that some families cut themselves loose;

though John Maynard Keynes saw you all as ‘Fifth Column’ Bolsheviks,

ready to hide in a horse of wood on Ramsgate beach, aping the ancient Greeks!

You always knew how to create a home and you married in nineteen-zero-eight;

minding your mother, three younger sisters and two older brothers, was no feather weight, but two older sisters, their spouses and children never dreamed of their horrific fate, they elected to remain in the new Nazi domain, and any rescue was far too late.

You’d weathered the Great Strike, the following slump and saw your progeny swell in size;

they were industrious, in many a sphere, as their new motherland bid to compromise;

the default in the Third Reich, meant it could never – or ever – humanize.

Emigrating and finding joy in a span of a staunch thirty-three years ended with grief and tears,

wholesale death to your near, promised a future of sorrow and fears

your grandchildren only know their forbear’s face is made of stone,

and your grandmother wants only to wail and moan all alone.

I run on fire.

Smoke squeezes through the door.

Bang bang bang on the window.

A mother drops her baby in prayer.

A man raises his arms.

Who brings this horror?

I seethe. I shout.

Firemen dash in - dash out.

Men jump to the ground.

No way to help.

No arms to save more.

No way up or down.

Who brings this horror?

I sear in anger.

In ash there are no tears.

What power sets us on fire?

A mother walks across flames

In the air to save her child

"Your a Joker" She Said

"Your a joker", she said,
Doubling over in laughter.
"If you didn't laugh
You would cry",
Said I.

And after
I felt proud
That I can still engage
With a girl, half my age
And make her laugh Out loud.

I hear Eliot's footman snicker.
The stage
Lights flicker
'Ere the curtain does fall
Covering all.

Bury them next to the shrub they

sheltered under in  summer’s rains.

sigh when weeding the spreading catnip.

Embroider a quilt to spread on the bed

where they slept. Pick up discarded toys to

pack away in a black box and hide

in a secret place.

The man who tried to live forever

He had a backup plan.

in the grounds of his mansion

But scraped off the road

he was a mess.

There was the back up’s back up.

A few of his T cells in a petri dish.

First a toe, then an eye, two ears, a brain.

but with no thoughts, memories, or emotions.

His earlier brain, kept in a jar its contents and

his life downloaded into the new brain.

The man who tried to live forever

was reborn a wiser man.

The next day he cautiously

That I’d be standing, before you here.

Trying to escape the thoughts in my mind.

I’d run and run but get nowhere.

The feelings inside too much to bare.

Anxiety held it’s grip on me.

No matter how much I tried to flee.

The storm around me grew and grew.

Things were getting much worse, I knew.

From reality I was slipping.

I’d question if I was really there.

I’d look around me, and blankly stare.

Could I break free from this storm?

Could I ever return to some sort of norm?

The storm threw everything at me.

It seemed that there was nowhere to flee.

Finally I decided enough was enough.

I’d head towards this storm, no matter how tough.

I wouldn’t hide or run away.

I’d say to my thoughts, you can stay.

I’d make anxiety my friend, not my foe.

And to my new life I’d begin to say hello.

I sailed into the storm and not away.

And slowly I got better day by day.

I was knocked about from side-to-side.

It wasn’t easy when I didn’t hide.

But as I got closer to the centre,

I realised things were getting better.

Then it started to become clear.

That there wasn’t actually any storm here.

The waters here were smooth and calm

I was no longer afraid of constant harm.

So I sailed on into the sun.

And continued the new life that I had begun.