Welcome to Virtual Dodo Eight. The latest edition takes our tally to more than 220 performances and contributions since launching in April 2020. A big thank you to contributors, both on video and page.

We hope viewers will enjoy the show – your support remains of enormous value to us.

Isabel Bermudez has published two full collections of poetry: Sanctuary (2018)and Small Disturbances (2016),  both  with Rockingham Press. She has three pamphlets, Serenade, Paekakariki Press, (2020)  Extranjeros, Flarestack Poets (2015)  and the prize winning Madonna Moon, Coast to Coast to Coast (2019) . She has worked as a waitress, journalist, documentary film-maker, grape-picker, receptionist, schoolteacher and private tutor.  She lives in Orpington, Kent, with the artist Simon Turvey.

Manatita, a.k.a The Lantern Carrier, is a creative writer and author with 21 years on the poetry scene.  He grew up writing poetry from age four, but switched to inspirational and meta-physical poetry when he took up the meditative life.

Equally at home with performance pieces, Lantern Carrier has won a Hammer and Tongue (H&T) Slam, featured at Run Your Tongue, Spoken Word Online, Gestalt, Dodo Modern Poets, Global Fusion, Ooobehive, BYOB and several other venues. He has been runner-up in slams, as well as making the finals in the H&T National Final (Brighton).

He has read at the famous Nuyorican Cafe and also in Nairobi, Kenya.

Lantern Carrier is a poet who tries to serve, to bring light through his pieces, to elevate and enlighten understanding. He endeavours to reach the heart and is a specialist in imagery, music, light, colour and dance in their kaleidoscope of different forms.

His poetry addresses the varying moods of the soul and the human condition, either in mystical harmony or in separation from its source.

We hope you enjoy the show and welcome your feedback.

POEMS ON THE PAGE

Our show continues with poems on the page 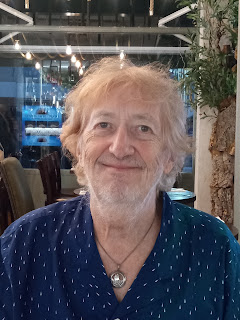 You could see their lunch

Waved a victim through

An image that grew in power

Before the guns fall silent

Cheated of the moment

When hope and history rhymed

As a president left his throne

And peace replaced the stone

On 30 January 1972 British paratroopers shot 26 unarmed civilians taking part in a civil rights march in Derry, Northern Ireland. Thirteen died on the day and another man later died of his injuries.

Yyou’ve fought on every front, downed each panacea;
the internet’s of no help – it’s fake medics’ propaganda –
one site promotes carrots – there’s no need to fear –
another stresses shallots are poison, so be sure to steer clear;
so reject and don’t follow the spells,
and decline to swallow snails’ shells;
resist a king’s ransom, it’s a fortune you’ll pay
for those website Gods all have feet of clay!

GGPs and clinics aren’t easy to access;
since the virus attacks left GB in a mess;
waiting rooms don’t exist anymore –who wants to infect, or contract, a flaw?
it should’ve been set in stone, years ago as a law,
seeing such a crowd of folk’s diverse ills ‘en tout’
was a hell of a job for GPs, to wade through the queue.

LLike an illusion, the new routine arrives like a mirage:
you’re drawn out of the medics’ ‘raffle barrel, to form a triage,
it’s no vis-a-vis, outdated, ‘appointment’ – it’s now on the ‘phone –
the GP’s been anointed, from high, to listen to your moan!
thus His or Her Excellency, will then give you hope,
as long as you ask for an ‘Audience’ from the Medical Pope!

I WISH I COULD RETURN TO MY CHILDHOOD

ONCE MORE TO WALK THE BOGLAND AND THE MOOR

SEE AROMATIC SMOKE RISE UP FROM THE CHIMNEYS

THE CHOSEN FUEL AND INCENSE OF THE POOR

THEN SEEK POOLS AS IF TO WASH ITS FEET

AND STAND UP TALL WITH ITS WORK COMPLETE

I WOULD FEEL THE SATIN SKIN OF LUSH GREEN RUSHES

REST AND TAKE MY EASE ON SUN KISSED ROCKS

HEAR THE SOUND OF BEES AS THEY SEEK NECTAR

DRINK TEA FROM A BOTTLE WRAPPED IN SOCKS

STAYING AHEAD OF QUICKLY RISING WATER

NO STOPPING HERE FOR SUN OR RAIN OR SLEET

DARK INGOTS HEAVED ON TO THE MOSSY BANKS

PUT IN CREELS BY THEIR WIVES AND CHILDREN

THEN BOG OAK IS EXTRACTED FROM THE SOIL

BY THESE BRAWNY MEN WITH MUSCLES RIPPLING

FOR MANY DECADES NOW INURED TO TOIL 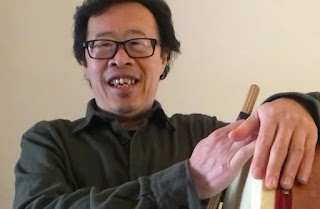 An eagle on a pole.

A rooster on a willow.

Wherever we roost, at dawn we call.

A goose on a dock.

A swallow around a roof.

Wherever we stay, in Spring we miss home.

A daffodil on a track.

A lotus in the mud.

Wherever we grow, wait till we bloom.

Intent upon becoming a writer
By attending night school
And sitting in warm libraries
For hour upon hour studying
Trying to
Catch up
On my neglected Education
With millions on the dole
Because of the cold and the East Wind which still Doth blow
Not that I am
Still at the mercy
Of the East Wind
As my life is heading towards its end
Never knowing then
That I was going to end up a poet
Which in retrospect
Is due to the East Wind
Which has shaped and changed my life.

Along the dark waters of the Thames stands the memorial

Long it stretches along the wall bordering the hospital

Where many it commemorates spent last hours

Alone terrified struggling for life with every breath

Thousands of hearts adorn its surface

Some once bright red now a pale shade of pink

Others gone so faint

Like memories of the lives spent in safer times

Names given meaning by messages of love

A dear father, taken too soon, missed by all

Taken by a visit to the shop, a drink in the pub

Could not escape the locking down of life of breath

On the opposite bank of the Styx sits the grand palace

Site of endless talk and lies

Gasping desperately for air clutching at the straw

For them the dollar and the pound the sandwich shops

The heaving pubs the cut and thrust of commerce and commute

Nor tears nor entreaties move from its predetermined axis

Accusingly the monument stares across

Waiting the moment of truth when accounts will be settled

And murderers names writ large in blood upon its tragic surface

the earth tilts 23 degrees out of the vertical

its orbit round our sun gives us the seasons

in summer we lean towards the sun

in winter we turn away nights lengthen

you turned away unaware a whole

hemisphere chilled leaving me out in the cold.


There Is No Light:

There is no light
To brighten the night
As I pass
Along the churchyard path.
Just gusting wind
Eternal as the rain.

in the darkening sky, the